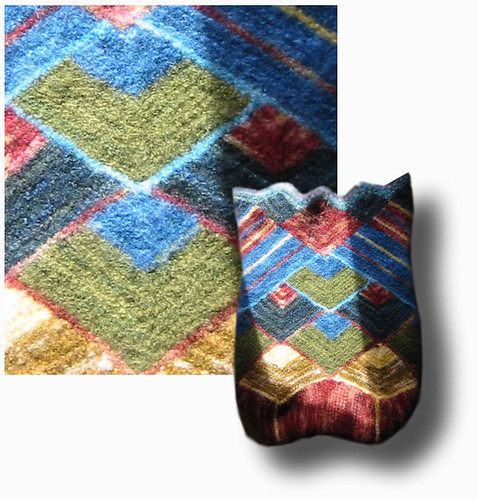 The pun is too easy.

UPDATE: I will definitely offer this pattern, probably free or very cheap (with proceeds going to a charity – maybe Heiffer.org?) after I get it together for the Tulsa class. I’ll base the jacket pattern on the same motif as the bag.

Here’s the bag that I worked up in Malabrigo, felted and blocked and happy to be colorful!

It was a blast – I really liked using the brighter colors (yellow, light blue ) to mark the border between squares. I feel like this was a warm up for a cool felted jacket. For a few years now I keep starting and stopping a mitered jacket. I get partway done, working up the pattern as I go, and then I lose interest. But it’s something I really want to do.

Speaking of modular knitting, also teaching at the Original Sewing & Quilt Expo in Minneapolis this weekend will be Vivian Hoxbro. I’m hoping that I’ll have a chance to chat with her – I admire her work SO much, it’s so amazing and beautiful! I feel like I’m in VERY good company, honored to be teaching at the same venue as VH!

I like to wear sweaters, especially in the winter, but a mitered jacket is something that I’d WEAR every day (except in the summer.) Perhaps I’ll expand the colorways I used in this bag into a felted jacket…?

Love Is Blue
Suffice to say that I feel very happy. Now we many actually get a little bit of oversight on a government gone mad. I can hear the sound of the paper shredders from here.

I donated a little almost every day to a different candidate in a small race – mostly to the Fightin’ Dems (candidates who are Iraqi vets and are running for seats around the country) I can almost feel my faith in the system spreading throughout my veins. Does that make me a blue blood?

Which reminds me of a joke:
– What did the Queen and Picasso have in common?
– They both had blue periods.

Okay, a terrible joke – but when I was in college it was the funniest thing I’d heard. Obviously I didn’t get out much.

So tomorrow I leave for Minnesota, after checking into my hotel I’ll drive down to Red Wing and then over to Northfield for a little tour (we’ve seen houses in both towns online that appeal to us.) Minnesota – the state so cold it’s blue. Except the weather’s been rather nice this week, from what I can see, temps from the upper 60’s down to the mid 40’s through the week. Sweater weather. Good thing I’m taking a blue one!