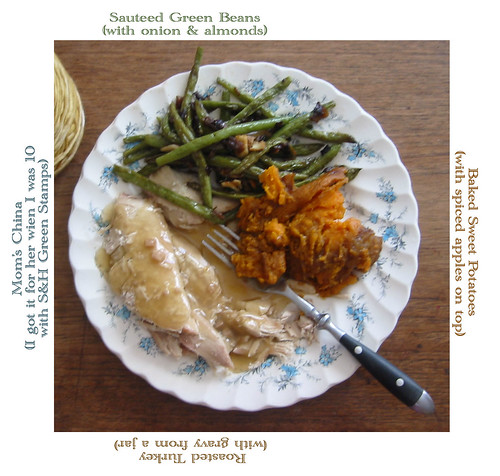 The day after, and the livin’ is easy.

I woke up with a terrible sore throat – of course, it didn’t stop me from socking away some more turkey, beans & sweet potatoes for lunch – but it’s just a really ROTTON sore throat. Somehow, Gerry just doesn’t seem too broken up about it…

I’ve been finishing up my step outs for the Knitty Gritty episode, and also working on my class materials for Tulsa. The end of this week will be my last big trip of the year – and the big Woohoo is that i get to meet DREW! FINALLY! He’ll be out in LA for our KG shoot, and it will be so great to meet him in person!

The way they’re shooting KG now is a little different. They’re using tape, which is a very good move, so editing will be easier. It means, though, that I have to make up 4 or 5 of each item in various stages of completion so that I’ll look as though I just sat down and whipped up the hat while Vicky and I were chit-chatting. Damn, I’m fast.

The house is in contract, but the buyers’ attorney snuck in a contingency based on their house selling (they’re in contract, their buyers are mortgage approved, but this is not what we wanted to hear the day before a 4-day weekend. Yikes.) But the choice is roll with this and sweat it out until 12/18 (when the contingency is off) or just walk away.

The house is still on the market – hallelujah – and my gut feeling is that this will end well. But who needs the angst?