So here’s how we spent our New Years’ Eve!

On the way I stopped at Menards for some plumbing stuff. Then after the books I dropped by Costco for the 48 pack of single serving pizzas (again, storage…) and other feed-the-kids items.

Then I dropped by the local movie theater and picked up tickets for that evening.

Home for unpacking, storage consultations with my inner organizational guru, a sort of quick dinner and then off to drop Gerry at the movie theater (he held the seats) and then drop the kids off at a girls’ soccer club babysitting evening (they had a BLAST!) and then a run back to the theater to find Gerry and settle in for a double feature of our making.

We saw Juno – and I urge ALL of you to go see this funny, quirky, insightful, tender, wise movie. It’s so well cast, so well directed – it’s a pure delight. And – special bonus – it takes place in the Twin Cities!

Or at least I think so … I was late arriving so I missed the first part of the movie, but it really LOOKED like the area around here. And where else would you be if you were driving over to Mankato, up to St. Cloud and over to Stillwater (all references in the movie)?

I couldn’t find Gerry so I sat alone. Apparently I was enjoying the movie a little too much because the couple 2 rows in front of me moved (I was waaay in the back, it wasn’t crowded.)

I really didn’t think I was laughing any louder than anyone else in the theater – I think they were sort of having a fight, so they were especially tense.

Sitting alone was odd, but good. I knew that Gerry was in the theater (in fact, he was only about 4 rows in front of me – I couldn’t see him) but I was enjoying a certain anonymity, alone in my seat, knitting like a maniac. Good times.

Somehow during the day I managed to get a nice amount of work done on the LL Cable Sweater, and I sent that off today along with the red cropped cardigan. A nice feeling.

When the movie ended Gerry and I met up and shuffled over to Subway for some delicious 6″ sandwiches. Now THAT is a NYE date.

Then back to the Grandview to see Sweeny Todd. Again.

Gerry hadn’t seen it – he really wanted to – and I enjoyed it so much last week that I figured I could easily see it again. And – it was even better. It’s been a long time since I’ve seen a movie TWICE in the theater – but this one was worth it! 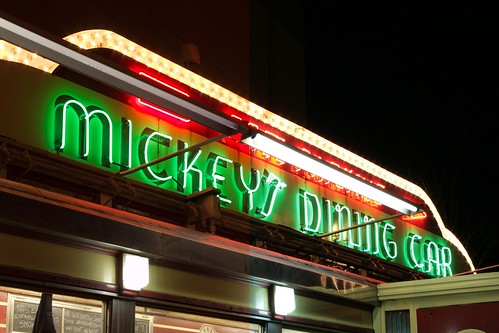 But the best part of the evening was picking up the kids and driving downtown for a very late night visit to Mickey’s Diner.

Fries and French toast and cheese sandwiches. I had a chicken sandwich. Our waitress sang, a girl with 3 shades of pink hair was sitting at the counter, and life was good.

We debated stopping by the huge Adirondack chair on Smith by the bridge and all piling into it for the countdown, but we were just too cold.

Back home we tried to watch the NY Times Square coverage, but we found it very depressing (Gerry said it looked like a telethon, he wasn’t far wrong!) so we watched the Garrison Keillor special on PBS, which really was more fitting (and more fun!)

And then to our beds. Or, actually, all of us to our bed.

We all piled into bed to watch Mr. Smith Goes to Washington and dreamed of the changes that 2008 will bring… Iowa, if you’re reading, please give Mr. Edwards a chance…

And thus ends a very hard year. And a very wonderful year. On to better things.