I’m feeling a little adrift – wandering the streets, finding a pub, but still feeling unsettled.  I’m certain I’ll feel this way until I find my classroom.  Wish me luck!

It’s been mentioned to me by folks here that when they visit the states they feel smothered with ‘assistance’ – too much ‘help’ – too much of a good thing, I suppose!
I’m feeling a bit the opposite.  I love doing things on my own, I’m good at it, and it makes me feel free and powerful.  But nearing the end of a 3 week adventure I’m also feeling befuddled and a bit tired. 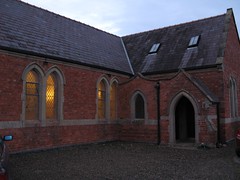 At Fyberspates (where, incidentally, Jen offered me some yummy grey Scrumptious for a sweater for Gerry – pattern forthcoming!  I swear knitting this is like knitting a teeny bit of heaven!) I felt so loved and tucked in.
I was missing Gerry, that’s for sure, but it was the first time in this adventure that I’d also felt so miserably unable to bridge the cultural shorthand that make up most communication between folks.
On woman in the class – a VERY nice woman – made a totally innocuous comment which entirely befuddled (obviously I like this new word…) and struck me hard.  She certainly didn’t mean it that way, I took it that way.  And I had the class take a break while I held back tears, then proceeded to go to my room and weep like a 6 year old.  Not even.  Like a 4 year old. 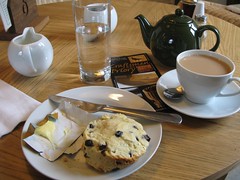 Feelings were calmed, but my red, red face takes about 3 days to ever get pale again after an emotional upheaval (my entire 2007 was just one red faced blur) and the class ended with a group encounter session and lots of love.  And I discovered that a cup of tea does, indeed, make EVERYTHING in the world seem better.
I felt miserable and stupid to have been the cause of such a fuddle, but after it was done there was nothing to do but try to recover.  I think I did. 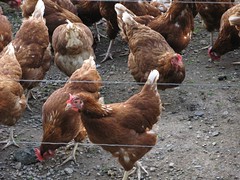 As I’m fond of saying, if you don’t OWN a mistake, you can’t GROW from a mistake.  I hope I grow from this one!  The hens agreed with me.  And further, they inspired me to knit up a hat using www.laughinghens.com Rooster – photos to follow if it works out!
Andy, the fellow who runs this website, is just delightful and I’m hoping to run into him and Jen at their booth today.  I just printed off  a map, so I should be in good shape!
After my several days of meditation at the chapel (I could really grow to love that place!) I headed on down to Bristol to teach at Get Knitted and felt so alone – so on my own – so adrift.
I missed Gerry more than I have in a long, long time, and it felt like years since we’d been together instead of days.  Who knew that having him here with me, in the car, laughing and having fun would make NOT having him in the car so hard?

The classes at Get Knitted went very well – I’ve already received so many lovely notes from folks, the students were exceptional and lovely and funny – as have all of my students here been – and we had a blast during our classes.  The liberal amounts of chocolate and caffeine didn’t hurt, either!
I did feel oddly disconnected from GK, though.  Adrift, as I said, and I chalk that up to the cultural differences between US yarn (wool) shops (stockists) and those in the UK.  I recieved a lovely note from the folks at GK mentioning they felt they’d left me on my own quite a bit, which was nice because then I didn’t feel like I was entirely in the twilight zone (Willoughby??) and I was very touched by the email.  Thanks, Gail!
Arriving in London yesterday I dropped my bags at the Novotel (another accord hotel, and it’s hot as BLAZES! with a non-opening window…) and that’s when I discovered that my computer seems to be getting connected, but refuses to ADMIT that.  Admission is the first step toward recovery.
If anyone has any familiarity with this issue, I’d LOVE to hear from you!  Email me using the link at www.anniemodesitt.com, or just leave a comment.
I’m going to try to find an Apple place here in London to ask them for help – I desperately NEED to be able to use my own computer (and my own keyboard – but aren’t I doing well with the UK keyboard when I’m sober…?)
Then I drove back to Heathrow, dropped off the rental car (£500 seems rather good for 3 weeks of an automatic shift, right?) and took the tube back to the hotel.  Okay, maybe I’m not THAT much adrift!
I’m heading over to – I think – the Horticultural Halls.  Lawrence Hall.  Does that sound right?  Lord help me.  I’m lugging a suitcase, and it’s rather near to the SECOND hotel I booked.
I may just check in while I’m there and have a pied a terre for PARTYING after my class tonight.  Sound like fun?  Come along!  The Modeknit Party Suite!
I’m SO looking forward to my classes AND to meeting the Get Knitted fellows.  And all my students!
Burn, baby, burn!