Since last November, when I first heard of it, I’ve been making small loans through Kiva – an non profit organization set up to facilitate micro loans to small business people, mostly in the third world, who could flourish if they just had a little help.

I feel strongly about this – and also about the amount of love and help our own family has been afforded in the past 9 months (just 9 months?) We’re setting into a rhythm, just working through our own new reality day by day, but we would be in a much different position if folks hadn’t helped us with our non-medical expenses as they have.

So – as a way of passing on some of the very good fortune that’s come to us through the love of friends – I’d like to introduce you to someone I just lent $25 to so he can raise funds to build an enclosure for $600 to pen his sheep. 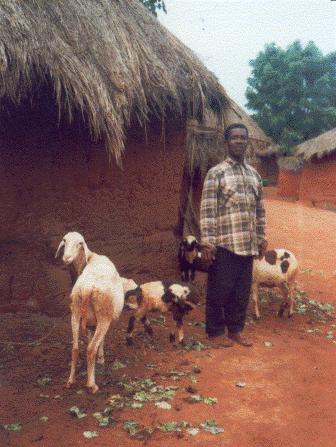 Here’s a description from Kiva.org:

Mr. Hounkpati Koutsodji was born in 1947 in Atsansi-Djita, in the Vo prefecture. He is a farmer who also raises sheep.

He is a married father of twelve (12) children who would like to build and modernize his sheep-raising business, as he is getting older and can no longer intensely work his land.

His short-term project is to build a pen in order to keep his sheep from wandering away and to take care of them efficiently. He deserves financial support, as the success of this project will allow him to increase his income and to fulfill his role as head of the family.

He is thus requesting a loan of $600, which he promises to reimburse in sixteen months.

Okay – when I looked at the photo the goat got me. The little head turn, the soleful eyes that say, “PLEASE get these darned sheep penned and AWAY from me!” Goats are very smart, this one looks brilliant, and I can see that he and this farmer have big plans.

So if you’ve been hearing about micro-lending, and wondered what it is or how you could become involved in a person to person way – here’s an opportunity.

Doctor, Doctor
Gerry’s doctor visit yesterday was pretty uneventful (YAY!) with the doc very happy with Gerry’s lab work and feeling that we don’t really need to see him again until after Thanksgiving.

In early Dec we’re heading back down to Mayo for his 100-day checkup, at which point they may put Gerry back on Zometa or some other similar drug to increase his strength.

Gerry told the doctor he’d just like to ‘toss around a ball with his son’ – which made me turn my head so neither would see I wanted to cry. Thankfully, right around the corner are triplet boys with a Super-Dad who is a baseball AND football coach (and an ER Doc – amazing, huh?) Gerry loves hanging out with these kids – they have a huge yard and there’s ALWAYS some kind of pick-up game going on.

So, if Max doesn’t have Gerry to toss a football to him right now, he has the next best thing – good friends nearby with a cool dad. Very good for Max, he needs that.

Gerry needs a haircut. He’s clinging to his last few strands of hair and is in definite danger of entering Smeagol territory.

My Excitement
Today CAP arrives in Minnesota!! I’m SO excited to see her, and she reminded me on the phone yesterday that twice before we’ve gotten together on Oct 25th (which is a monumental day for her in many ways) so here we are again – getting together on 10/25!

When I edited the book of essays, Cheaper Than Therapy I asked Laurie if she’d contribute something, then I beat her over the head via email until I got it. Nice, huh? Her essay, Drunk, Divorced & Covered in Cat Hair is exceptionally funny – and now it’s a book of the same name, which has sold, oh, 583 times as well as CTT. And it deserves to – it’s so great!

She writes about a class she took with me [gleam] at Unwind in Burbank, and when I read that chapter for the first time at a yarn shop in Petaluma (Knitterly) I almost burst into tears. She’s very kind.

Her schedule is INSANE. She’s doing all of this while keeping her ‘real’ job because – as you may or may not know – writing a book is usually NOT going to pay the bills, if anything you hope it gives you a little space to write MORE books!

With any luck I’ll see her tonight – I’d like to kidnap her and drag her over to meet the family. Who am I kidding? I want her to see the new bathroom & kitten!