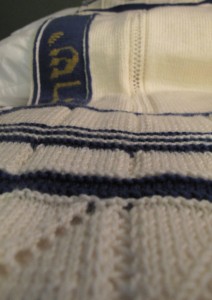 Many of you know we have a big event coming up in 2 weeks (or 12 days as Max would remind me).

Max will be welcomed into our congregation as a Bar Mitzvah (son of the commandment) and we’re all pretty excited.

His portion is Yitro, which is a big deal because it’s the portion which contains the story of the giving of the 10 commandments.

Yitro (Jethro) is one of our favorite characters in the whole big story, and has the added attraction of being the only non-Jew for which a portion of the Torah is named.

Some day Max will be very happy to have learned how to chant the whole 10 Commandments in Hebrew, but right now he’s just concentrating on getting through it.

He’s been attending Hebrew school on Wednesdays and Sundays for a few years, this past year that was amplified with individual weekly meetings with the Rabbi & Cantor, and weekly tutoring sessions with a lovely woman (whose mother is an avid knitter!)

So Max will be ready.

He’s written his dvar Torah – the speech he’ll give about a section of his portion that resonates with him.  (Spoiler alert: It’s not about the 10 Commandments…) Family and friends are flying in from out of town, a band has been hired, food is being prepared.  But I wanted to do something more personal to show Max how proud I am of him.

So I knit him a tallit.

A tallit is the rectangular shawl that is worn by Jews when they pray.  There are certain rules about it, which are adhered to with differing levels of observance, but knitting one is perfectly okay.

It could have been any color, but I stuck with a traditional blue and white.  I used wool (Louet Gems merino) and tried to keep it simple.  I didn’t want it to be girlie, of course, but I did want to have some geometric lacework.

The atarah (crown) is the collar portion.  I could have created it in several ways.

I could have bought one; I could have written a Hebrew verse or blessing using fabric markers onto a band of fabric; I could have embroidered a message (but when I tried that route it didn’t look great.)

But I settled on knitting the atarah with the words Sh’ma Israel –  “Hear O Israel” in Hebrew:

I cleverly selected a short phrase so the knitting wouldn’t be as odious.  I still managed to leave off a yud (head slap!) so I had to duplicate stitch that little bit in later.

All that’s left is to tie the tzitzit – the knots at each corner – which are the whole point of the garment.  Hannah’s very good at the tying, so she’ll be handling that part of our project.

A few years ago she painted a tallit in her 6th grade Hebrew school class, and it’s just lovely (she’s going to wear it at Max’s service) That was when she discovered her latent talent as a tzitzit tyer! 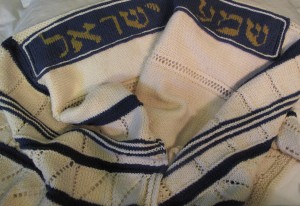 Making this ceremonial religious piece has been an adventure and a journey for me.  The pride and love I feel for Max and his accomplishment, my own excitement at being part of this, and just the great fun of this tal-knit will always be a part of my memory of Max’s big day.

I found myself exploring my own connection with Judaism, my feelings toward the traditions, and my place in our interfaith home as I worked through each section of the piece.

This past Sunday a group of women met at the Temple to knit healing shawls for folks in need.  I joined in to help some new knitters hone their skills, and enjoyed myself thoroughly.

This was week one of an ongoing series of meetings which had been planned in part by Jane Steinman, a lovely woman who used to be the president of the congregation.

Jane was so welcoming to Gerry and I when we were considering joining Mt. Zion, so it was with great sadness that we learned of her sudden passing late last year.  I was glad to see Betsy carrying on with the plan for the knitting sessions, and the women who showed up really enjoyed it!

Jane had been a cancer survivor (Gerry bonding) and an avid knitter (Annie bonding) and I like to think that Jane would really appreciate the knitted tallit for Max. I wish she could be there to see Max wearing it on the bima.

I’m currently finishing up a crocheted kipot (yarmulke) and a tallit bag where he can carry all of this stuff (also crocheted)  I’m working these up mostly in the blue Gems, which has been a dream to work with (as always!) 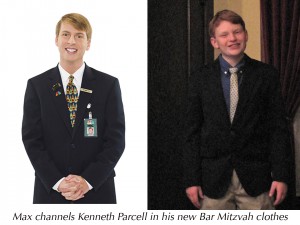 I hope I don’t sound like a broken record when I say that this project just SAILED by as I knit it up with my Signature needles.  They are the fastest needles I’ve ever use.

Next, we take Max and shop for duds!  I’m campaigning for a nice blazer and khakis, Gerry’s feeling a suit is necessary.