I’m certain it’s been apparent to folks who read my blog or twitter/facebook feeds with any regularity that I’ve been struggling through a dry patch in my design work.

The root of the problem, I think, is something yet undefined to do with the fibromyalgia.  I just don’t seem to be able to have the concentration OR the drive I used to have, so ideas aren’t as fluid as they used to be, and once I do snag one it’s harder to put it into practice.

Part of my also wonders if my odd confused and subdued state might be some hormonal thing.  I have no ovaries, and my hormone prescription (which worked well for so many years!) has been changed over and over in the past year for no reason other than the insurance decides from month to month that one medicine is “in” and another is “out”.

This morning I cleaned up my basement office, tossing out literally dozens of nascent swatches which came to nothing – this is not uncommon.  I think through ideas by swatching them, often I’ll rip out the swatch and reuse the yarn.

However, if I feel it would be useful to hang onto the swatch, I’ll do so and toss it into my “swatches in process” box to return to later.  Sometimes these returns glean a new understanding, sometimes they’re just a trip down memory lane.

Today I decided to toss out the swatches that are of no use to me or anyone, and it felt good. But each swatch that was tossed also felt like a little design that wasn’t being realized.  I have to trust myself, my notes, and my ability to revisit a good idea later when it really resonates with a current design problem. 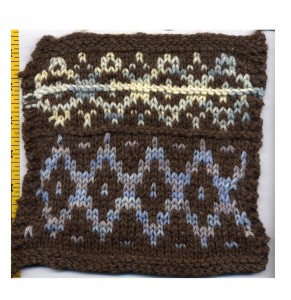 I also packed up a good amount of yarn I can’t design with (either the yarn’s been discontinued, the company has closed or the colorway is no longer produced) for the charity knitting program at my local temple.  That, too, felt very good.

I’m hoping this cleaning will be a metaphorical as well as a physical boon, helping my mind to move toward new spaces (and allowing me to return to unfinished challenges with a clearer path!)

Of course, History on Two Needles is top on my priority list.  I only have one more sweater to knit up for that, and there are several sweaters I’d like to REKNIT to double check my pattern configurations (odd, period shaping can be a scary thing!)

I may have found someone to help me wade through my pattern worksheets and double check them for clarity, a job which has already proved daunting to some great knitting minds, and has reduced me to tears at times.

I ask myself, “Why are my patterns so odd?  Why so complex?” And this morning listening to On Being on MPR I think I had a bit of a revelation.  Krista Tippet’s guest, John Paul Lederach (who works in what he calls “conflict transformation”), was discussing what Oliver Wendell Holmes called “the simplicity on the other side of complexity”

In design and in pattern writing, my goal is simplicity.

Complex-ness, complexity, is a necessary phase I must pass through to achieve a universal simplicity.  In my better patterns (Twisted Float Shrug, Universal Mitered Bag) I’ve been able – through a GREAT DEAL of swatching and math – to create a rather simple pattern which can be easily altered to work well with a variety of yarn weights and for a variety of sizes.

But it’s a winding path from the well-groomed “front yard” of simple, rough pattern through the complex “wilderness” of  confusing, math-ridden pattern and out into a “natural meadow” of final, deceptively simple pattern.  It can be a long slog.

The reworking of a pattern, and then the reknitting of it several times, is necessary to get to that sunny, bright and peaceful meadow (this is why I like to first knit my own samples, the enlightenment that comes from the knitting is hard won and possible in no other way.)

I made a decision to not attend VK Live or TNNA this January.  I’m teaching in Orlando at the end of the month, and I’ve limited myself to 1 trip per month because I know what more travel takes out of me.  I know that my physical stamina wouldn’t allow me to do all that traveling.

But it’s hard to read the excited tweets & blog posts about how great VK is, the wonderful classes, the cameraderie, and not feel a bit left out.  It was my own choice, I think it was a good one, but it would be nice to connect with my knitting design friends.

Along the same lines, I’ve decided to only submit to a very few magazines until I get History on Two Needles, finished.  I can’t continue to allow myself to put other work in front of what is a strong passion simply because I’ve reached a rather rough part in the HoTN process.

So as deadlines zoom by this month for magazines that I admire, I find myself sitting on my hands instead of sending in sketches and swatches.  Once again, it’s my choice, but it makes me feel a bit superfluous.  Not a helpful feeling, and I’m the only one who can break through those feelings.

So I supposed what I have isn’t Designer’s Block as much as it’s a realization that I need to stop walking, look up and see where the sun is, get out my compass and thoughtfully find a better path to that darned meadow.

To that end, today I’m spending the entire afternoon knitting things I love, with no thought to where it might end up (book, magazine) and only trying to find some of the joy I’ve been missing as I doggedly march through a dark wood.

I think I’ll knit a fine hat, my soul could use a little millinery.