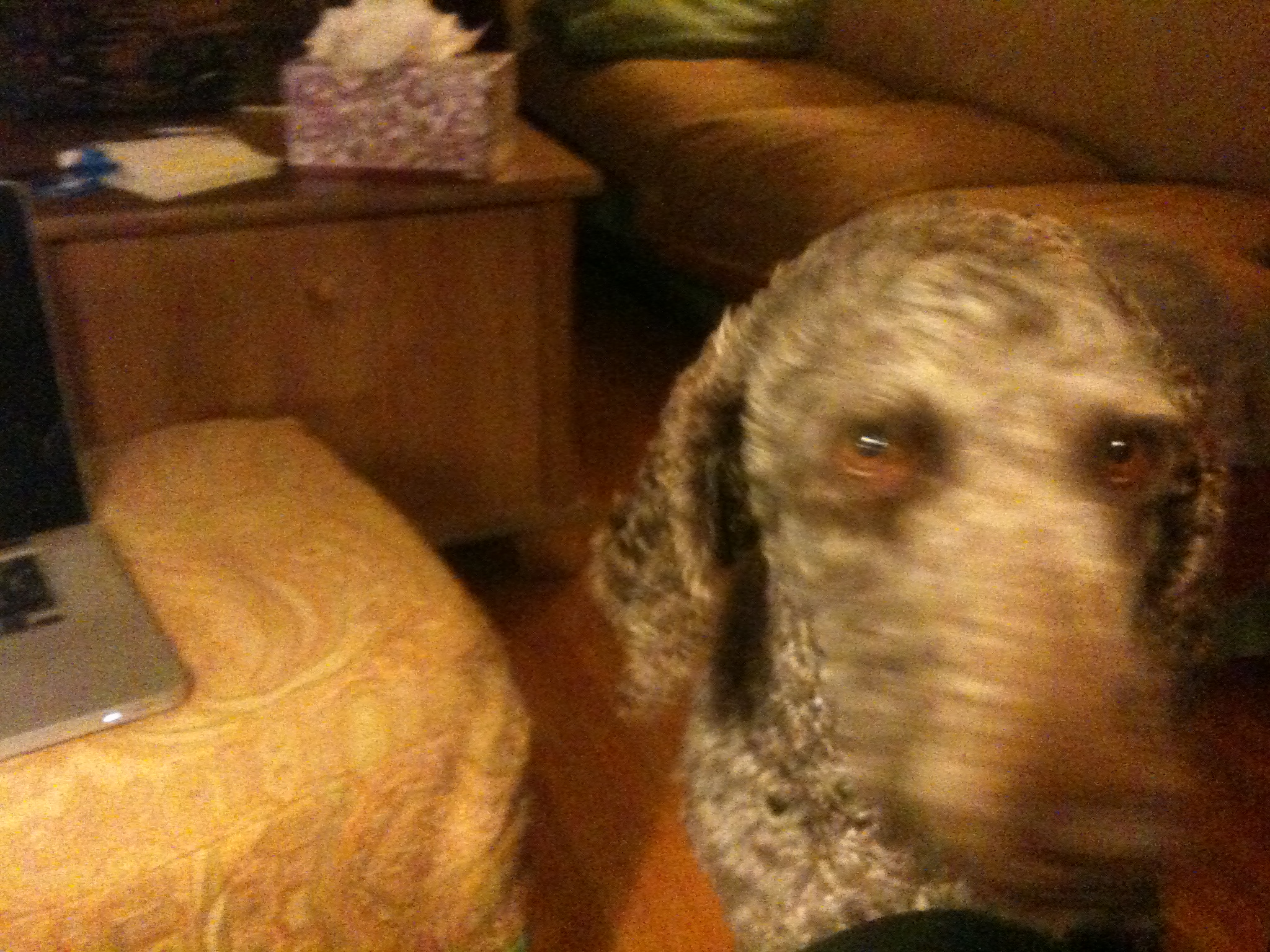 I wanted to wait until a month had passed before sharing our good news (which some of you already know) but we have a new addition to our family! 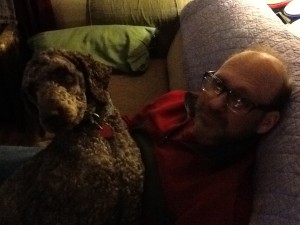 He’s a Standard Poodle, a rescue, his background is sketchy but what we know is that he was with a breeder who may not have been as kind to him as they should have. He’s 3 years old, and when we first met him before Christmas he was calm but a little uneasy, he had kind eyes, but he wasn’t connecting in a joyful way with Gerry or myself. 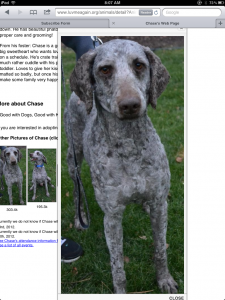 I saw him on a rescue website, and on a fluke his foster mom happened to be in our neighborhood the day before we left for Southern CA and brought him by. We had to make our decision kind of quickly, I think I was more definite than Gerry was (although he wasn’t against the adoption, just not as certain as I was)

Jasper’s foster mom told us that he had been a bit nervous, had a few peeing accidents when he was scared or startled, and of course that was a concern. He even had a little ‘doggie-depends’ contraption to wear when I picked him up from the foster home on 1/4/13. 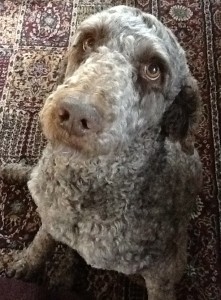 But what really sold me on Jasper were his eyes. He had incredibly kind and empathetic eyes. I feel that you can tell a lot from an animal if you listen with your heart (that sentence was a little maudlin, I apologize) and Jasper – who was called Chase by his foster family – seemed like a dog in search of someone to trust.

The kids reacted differently; Hannah was pretty upset that she learned about the possible adoption when I facebooked about it (totally understandable) and Max was neutral about the possibility. 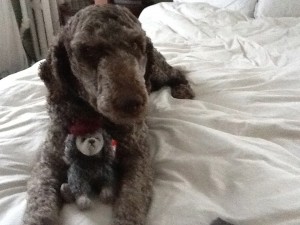 During our 2 weeks away we discussed the dog a lot, and one thing that made the kids feel more engaged with the process was renaming him. Hannah hated the name Chase for some reason, we all have likes and dislikes that are hard to explain. Max suggested Jasper, and we all liked it. I felt it was close enough to Chase that it wouldn’t be too confusing, and as far as we knew he’d only been “Chase” for a few months.

I picked up Jasper alone, so it would be a calm situation. When I got home we realized that Jasper was scared of tall men and growled at Max when he first met him. It took about a week, but slowly Jasper and Max befriended each other (Max became “Mr. Walk” and “Mr. Food”, and that helped Jasper trust him). 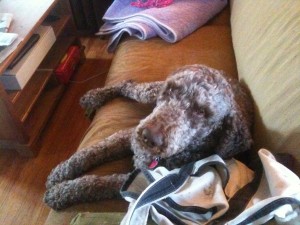 Hannah didn’t immediately bond with Jasper, I think she still felt a bit alienated from him because the process happened outside of her time at home, but slowly she, too, has come around and is loving Jasper.

The cats weren’t thrilled after having the run of the house for a few months, but it only took Ginger a little over a week to climb into bed and sleep next to Jasper. Nitro is longer coming around, but she’s definitely not afraid of him, and he’s not bothering her, so the path ahead looks clear. 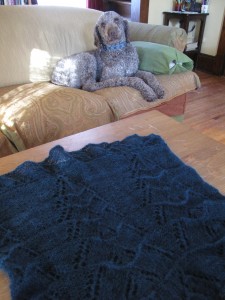 Jasper is trusting us so much now, loving us, really becoming one of the family. One of the great joys of this dog is actually SEEING how his love for his new family is growing; it’s both touching and delightful. We are VERY lucky!

My friend London came over and Jasper fell head-over-heels in love with her! He wouldn’t get off her lap, just loving her, acting like a tiny poodle instead of a huge Standard. He also loves my friend Kathleen, he acts so excited and happy when she comes over. Loving our friends is a huge mark in Jasper’s favor!

We took Jasper to the vet and she gave him a clean bill of health. He was only fixed over New Year’s holiday, so he has a LOT more muscle mass than our last poodle, who was fixed as a pup.

He’s an unusual silvery-grey color with brown marks, really quite beautiful. His eyes are so soulful, he speaks volumes when he looks at us. We’ve trained him to do some small, silly tricks and also some helpful stuff like HEEL and STAY. He’s GREAT on walks, and never pulls when walking over ice (which is very important for both Gerry and I).

We took him for a family trip to our local dog run at Battle Creek Park and he was SO HAPPY! That really was a momentous event for all of us, it sealed the deal – emotionally – for both kids, and was the most joyful we’d seen our previously sad pup. We all felt very lucky to be part of that day, when Jasper let loose and showed how much he loves us.

So welcome to Jasper, our new love.