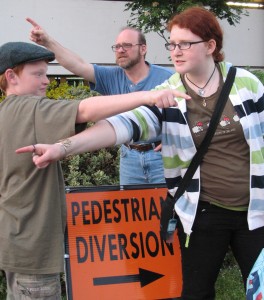 One thing about me that drives my husband nuts (one thing?) is how I tend to see every day things as a ‘sign’ of better things to come.

Usually I’m joking, sometimes I’m not, but when we were first married in 1993 I would often say something like, “See, that’s a SIGN that everything’s going to be fine!” and he’d just roll his eyes (looking for all the world like a 15-year old ME reacting to my mom.)

I’m taking the past two exceptional weekends of teaching as a sign that things are looking up,  and no one can convince me otherwise!

This past weekend my business partner, Kathleen Pascuzzi, and I had a booth at the North Country FIber Fair where I taught four classes and had a generally wonderful time! There are SO many little  shows like this around the country, which I see as an indication of the vitality of the fiber industry, but this was one of the sweetest.

I might feel that way because I have seldom taught classes feeling SO much in pain, and receiving such a boost from my students!

When I add to that the previous weekend in the Dallas area teaching for the Dallas Hand Knitting Guild and the Hand Knitters Guild of North Central Texas, I’m overwhelmed with the amount of love I’ve been shown this month!

I have mixed feelings about Texas. I had a job there I absolutely hated and a boss who seemed gleeful every time he could make my life a bit harder (in all fairness, he was originally from Ohio)

But it’s also the place where my brother met his soul mate, where he lived and then passed away, and it’s where my mother also lived at the end of her life and where she died.

Having a loved one die in a place will always attach a lot of strong emotions to that location.

Mostly, though, I have a very hard time with heat.

But I got very lucky; not only was the Lone Star State going through a bit of a cool snap, but the host yarn shop for my classes, The Knitting Fairy in Grand Prairie, TX, was one of the coolest shops I’ve every visited (in both senses of the word – yay!)

Alissa, the owner of The Knitting Fairy, was incredibly welcoming and loving to everyone who came for classes, and made me feel as though I was visiting family. I’ve seldom felt so loved, so cared for, as I did when Alissa took charge of my comfort while I was in her shop. THANK YOU ALISSA!

It’s also quite obvious how well loved she is by her customers, which is as it should be!

After two days of classes for the Hand Knitters Guild, I was kidnapped on Saturday evening by Ron & Theresa Miskin of Buffalo Wool and taken out for some AMAZING chili, some drinking and some Outlander.

We visited with Lise from Knitting Rose Yarns (review of a Knitting Rose/Buffalo Wool yarn to come later this month) at her beautiful home, and I’m afraid I broke my main rule of teaching; NEVER GO OUT THE NIGHT BEFORE A CLASS.

I was able to pull it together for my Sunday Classes (just barely) but still feel guilty for not doing all I could to be 100% for my students. It was some damned good chili, though…

I felt so loved at my two gigs, and was BLOWN AWAY when I was given a lovely gift by the Dallas Guild just before I left, one of those wonderful yarn carousels which will be INCREDIBLY USEFUL as I re-ball odd FLOW skeins.

THANK YOU, EVERYONE IN TEXAS!

I joked one morning at breakfast while we were at Watertown, SD that every item on the menu was shaped like a president.

I ordered the FDR oatmeal, it looked like a dime!

But that was before I realized that we were staying at a hotel with a top notch chef in the restaurant!*

When you’re driving a SUV with a Uhaul, it’s hard to get around all those traffic cones!

is a necessary evil, though, and perhaps better roads will bring more folks to what was an extraordinary little fiber show, the North Country Fiber Fair.

There weren’t a lot of vendors, but the ones there were exceptional! Excellent yarns, gifts, baskets, buttons, ceramics, LOTS of spinning fibers and tools – just a wonderful variety of great small businesses!

It was if they’d distilled a larger fiber show and brought the best to South Dakota!

My classes were in a lovely, air conditioned room (they’ve got Rhinebeck beat by a mile, there!) and my students – well – it’s hard to praise them enough.

They were a confident, easy going bunch of friendly, wonderful students who took in everything I taught (and begged for more!)

The sheer openness and transparency of the folks in my classes was refreshing – like a stiff prairie breeze!

The drive out and back was a straight, 4-hour shot. Kathleen was magnificent as our driver-in-chief and head-booth-maven.

My job was to tell her where to turn.
We had exactly 3 turns in each way.

We did surprisingly well in sales for a show that wasn’t huge, which is another reason to love the NCFF!

*Minerva‘s, in Watertown, SD, is a restaurant you should visit if you’re in the area.  I will admit that we were NOT expecting such amazing food. Our last night there we had a pork chop dish that will be on the menu for their Octoberfest celebration in, uh, October. If you’re in the area, you need to get yourself over there for a meal!