The last time I went to my doctor and was measured, I was a full inch shorter than the last time.  ONE INCH! This was a different doctor’s office, and I’m certain there are some discrepancies in how hard the nurse pushes down that little metal arm on top of my head to get the reading, but an inch is a LOT!

So it’s not so much that I’ve gained weight this year, as that I’ve lost height. And it shows! Clothes seem to fit differently, my own ‘personal space’ just feels different.

It’s frustrating as I’ve been eating pretty intelligently this year (although never enough leafy greens, always working on that!) but I haven’t been cycling as much as I have in the past. 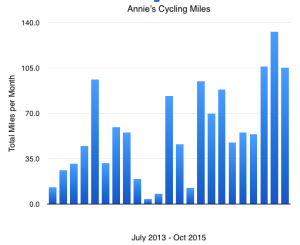 Or maybe I have.

I just made a chart of my total miles per month (I’ve been keeping track of all these numbers via Daily Mile since 2010) and it looks like my cycling has actually INCREASED in the past few years.

That doesn’t change the fact that clothes are fitting weirdly (not tight, just weird) so I have NO idea what’s going on…  It’s so odd when a portion of your personality’s been based on being tall, and suddenly it seems you’re one of the short ones in the room!

Well, regardless, I’m off for a long bike ride today. I’ve earned it, damnit, and I deserve it! 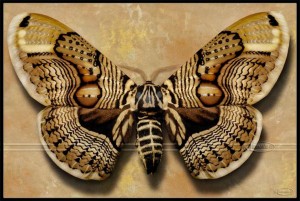 Yesterday I did something I haven’t done in months, I biked over to St. Kates and sat on the porch, knitting.

I’m finishing up a sample garment that we’ll be releasing in December, a scarf (shawl?) I’ve based on the beautiful Brahmin Moth.

I’ll reveal the images later, but it’s one of the nicest things I think I’ve ever designed.  I’m really excited about it, as soon as it’s tech edited I’ll have some folks test knit it, then I’ll release it!

I often get inspiration for colors from insects, they’re so beautiful! While looking through a bunch of moth and butterfly images I ran across this amazing moth, and knew I had to create a garment that reflected the stunning contrast and tone gradations.

I’m terrified of wasps, but one of the most beautiful creatures on earth is the Cuckoo Wasp, which was the basis for one of our colorways in our FLOW club last year.

I was so excited to find this baby online (and NOT in my house) and it was thrilling to be able to match the colors in yarn!

Here’s some of the Cuckoo Wasp yarn already dyed, ready to be rolled into balls.  I knit all the fabric up, then dye it (so I can place the long-color gradients) and then roll it into balls.

Yes, it’s labor intensive, but it’s worth it for the beautiful FLOW effect!

I’d be interested in hearing from you what color inspirations you see in your life!  Please add a link in comments to an animal, landscape, food, book – anything that gives you a ‘color shiver!’