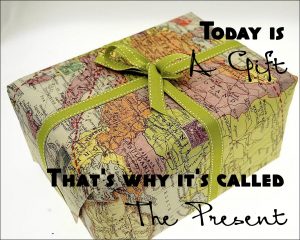 What’s that meme that’s been around since Hector was a pup?

“Today is a Gift,
That’s why it’s called
The Present!”

So I feel especially gifted today because it looks as though my cancer will be treated at The Mayo Clinic!  And I will be PRESENT!

The Last Few Days
I sort of disappeared for a few days while I was at Mayo, and I’ve had many folks write to ask if I’m okay, or if maybe something’s gone terribly wrong and I’m hiding it (I’m not!)  So I thought it would be good to just write up what’s transpired.

It’s been busy in the cancer-patient sense in that we drove down to Mayo for an appointment, ended up presenting with the highest fever I’ve had in months and incredibly high pain levels, got admitted to a hospital and then just — waited.

I think the 90 minute car ride was too much for me, it REALLY wiped me out.
I feel a bit feeble as I write this, but that’s my reality these days…

We were a bit late for our appointment on Thursday, so we rushed up to Dr. T’s office and we were seen very quickly.  I already had a Mayo Clinic Number (the magic number without which NOTHING can happen…)

Eleven years ago I had a minor asthma/allergy issue so I saw a doc at Mayo & was assigned a clinic number. Gerry’s insurance at the time was through his union (IATSE) and, because it was a mostly male, rather traditional union, they wouldn’t acknowledge that I had a different last name than Gerry. So I became “Annette Landy”

Waiting for Dr. T, we had to go through the assessment with a nurse, and during that time my fever began rising, my pain began going through the roof, and I was in pretty bad shape with Dr. T walked in.

We chatted at length, I’m ALWAYS surprised at how much time Mayo docs are allowed to give patients for simply talking through a case,  That is golden, and so helpful!

Dr T really wanted to admit me based on my fever, my heart rate (which was VERY high, much higher than normal) and my pain levels, and Andy and Gerry were both pushing for that, too.  They could see how badly I was doing, I couldn’t.  Pain is my “normal”, a bit more pain just felt a bit more — normal?

I agreed and was admitted to St. Mary’s Hospital (Methodist Hospital was full up, it was a busy week at the Mayo system of hospitals in Rochester!)  I had nothing with me, no computer, no underwear (except what I wore, no toothbrush; for a Virgo, these unplanned admissions are hell.)

I didn’t see Dr. T again this trip, my care was in the hands of a Treatment Team, and I dealt mostly with a very sweet young doctor named Glen Stewart.  I don’t think I’ve ever met anyone with a more Scots name.  We had a lovely chat, and I feel very confident in the group that will be dealing with my cancer.

So THAT’S why the radio silence; no radio.

And I can’t say it wasn’t a bit of a relief to have a reason NOT to blog every day at 2am.  I’m not holding my self to a schedule in this blog, but I also know that writing regularly becomes a bit of a pact with my readers.  If you’re kind enough to want to read what I’ve written, then I should be thoughtful enough to just check in and let you know all is well!

Sweet T
We met with Dr. T* from the Mayo’s Hematology Department, who had been referred to us by Dr. H, Gerry’s OWN Hematologist for the past 12 years.  Because Multiple Myeloma (Gerry’s disease) like Lymphoma (my disease) are BLOOD cancers, they’re both treated within the Hematology Dept.

Dr T’s demeanor and presence were so comforting, so immediately soothing and so full of — LOVE — that it sort of took Gerry and my breath away.  Although she feels that the protocol I’m on is good, she feels that a stronger, more intensive chemo MAY be of use to me, and it’s a cocktail I can only get at Mayo.  So it looks like I’ll be getting my chemo at Mayo.

The actual details have yet to be worked up, but at my next Mayo appointment is on Sept 6 to return to the Mayo for more testing.  I’ll remain in consultation with Dr. N up here at St. Johns Cancer Center, because he’s really great!

One of my worries was that there might be bad feelings because I want to move my treatment.  But it’s a small worry, and the docs on my Mayo ‘Treatment Team’ told me that often the initial doctor on a cancer case is happy for the extra help and guidance from Mayo.

It really was just luck of the draw that I happened to go to St. Johh’s ER where the diagnosis happened, begin treated by them is not carved in stone.  Having said that, I really like Dr. N, my medical oncologist at St. John’s, so I hope he is cool with my decision!  I think I’m due to see him this week, we can chat about it.

B-E   A-G-G-R-E-S-S-I-V-E
In my last post I wrote that I was receiving R-Chop, but I was mistaken. I was receiving something similar, but slightly stronger (I’ll write more about it when I have the actual NAME of the protocol!)  However, the NEW course of chemo Dr. T at Mayo wants to put me on is even MORE aggressive than either R-Chop or it’s nameless superseding chemo.

Because my body handled the first round of chemo so well, I think it heartens Dr. T that I may do well on the more aggressive chemo.  Plus, my CANCER seems to be a fast acting, sneaky, type of antagonist, and requires a more aggressive treatment.

The fact that I didn’t require a transfusion after my chemo, and my lab work looks very good right now, makes the decision to go aggressive that much easier.

For the moment, I’m just basking in the idea that I am SO DAMN FORTUNATE to have folks like Dr. H and Dr. T (and Dr. N, and so many other medical professionals) ON MY SIDE!

Birthday Girl
Of course, this whole Mayo thing is coming to a head during my birthday weekend (I’ll be 57 on Monday – HUZZAH!)

WHAT? You thought Gerry was an Aquarian?  Yes, yes he is.  But 11 years ago, on Sept 1 2007, Gerry received his stem cell transplant.  That became his new “birthday” and our family acquired a new Virgo!

I can’t say that we have a cake and ice cream every year to celebrate, but we DO acknowledge it, and appreciate it, and feel so fortunate that it’s worked so well.

And, of course, that gives ME more hope.

Right there, lying in bed next to me, snoring, is my fountain of hope.

Hair Today?
Also, right on schedule, my hair is making me crazy.  It’s falling out, sometimes in handfuls, but generally just one strand at a time, and usually right in whater I’m eating at the time.  Not pleasant, not fun.

So I’m going to have Andy go ahead and shave me tomorrow.  To look at my hair, it still looks thick and healthy and lovely, but when you part it you can see areas that are pretty damned thin.

It just seems easier to start shaving my head, and continue if I need to because of stubble.  Perhaps it will continue falling out so quickly that no touch-ups are required, we’ll see…

*With a 15-letter, six-syllable last name, she insists that folks just call her “Dr. T” – she is absolutely lovely!  I swear I WILL learn to pronounce her name!