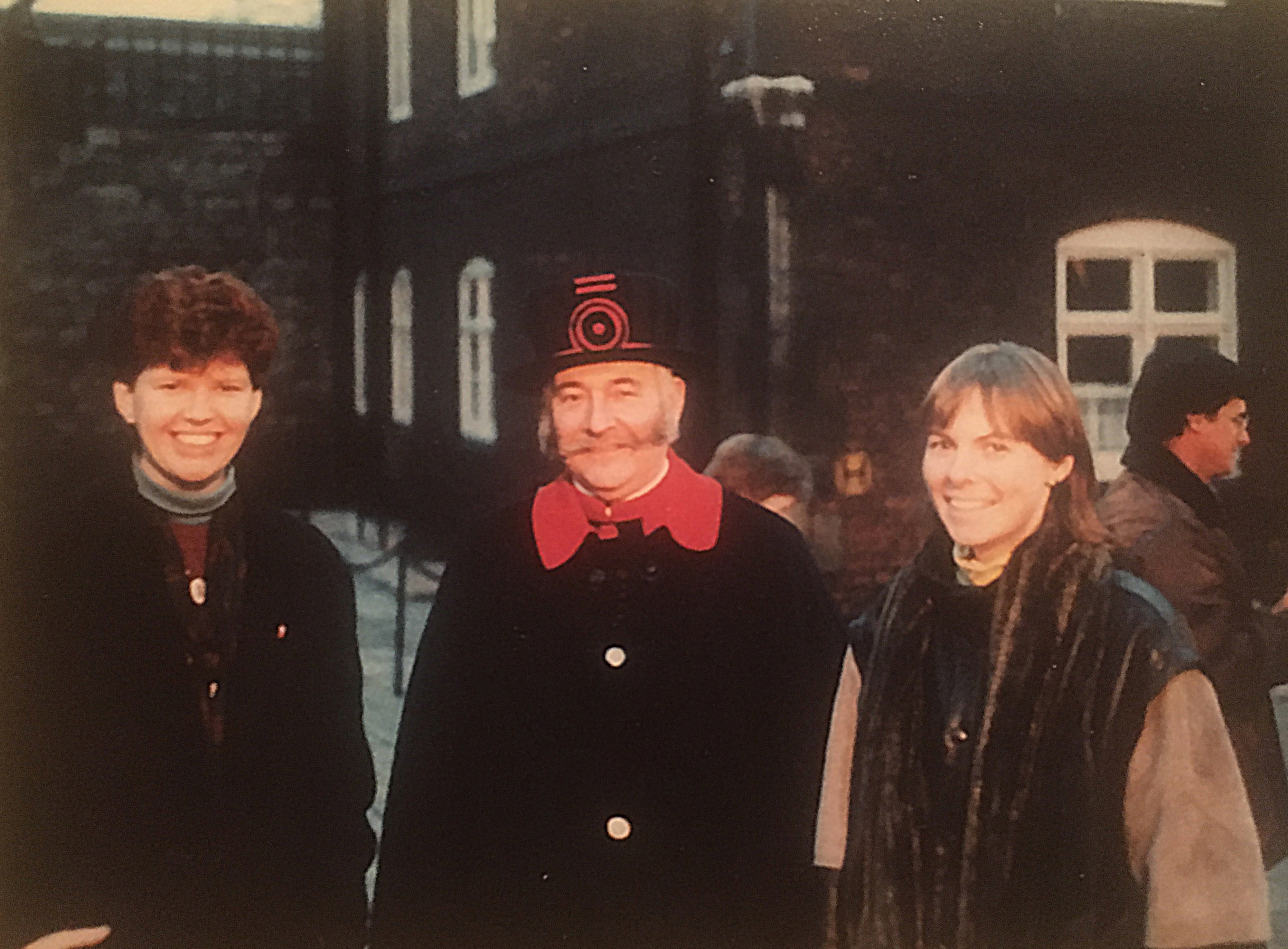 What a lovely weekend!

My first day at Denison I met Ellyn Shannon.  She was having the WORST allergic reaction to the Ohio Valley humidity and fall allergy triggers, she was sneezing and stuffy and could barely open her eyes.  I think for the first few days of college, she was prone on her bed, face down, suffering the torments of the damned.

Ohio valley has that effect on first time visitors from the east coast,
the weather + allergens + humidity can be BRUTAL.

Ellyn and I became very good friends.  The first time I ever visited New York City it was to stay with her family.  Her dad took us to my first Broadway show (Ain’t Misbehavin’) and I had my very first cannoli en route to her home in Rye, NY.

We traveled to London together after college, and had a BLAST!  As I’ve said before, if you can travel with a friend, then you can be FRIENDS FOR LIFE!

She didn’t stay at Denison for her entire college career, eventually getting her bachelors & then masters degrees from NYU.  For whatever reason, Ellyn never entirely seemed to understand exactly how brilliant she is, which is true for so many women, but perhaps that is changing?  I hope so.

As friendships do, ours went in and out of various phases; sometimes we were so close, then there were periods when we were out of each other’s lives for long stretches.

But the mutual respect and love we have for each other hasn’t dimmed since that first weekend when I tried to relieve her allergy suffering, but didn’t do much more than hand her tissues.

For the past few weeks, since my Lymphoma diagnosis, Ellyn’s been up each morning early and we’ve been messaging each other.  Sleeping has been hard for me, but knowing that I have a friend in NYC who has to get up at 6am (5am central time) and who is happy to chat with me for a few minutes, has made my sleepless mornings easier.

So imagine my joy when, on Friday, Ellyn confessed to me that she’d booked a flight out to St. Paul and would be staying the weekend!!  She also booked into an Air BnB, but – luckily – her host contacted her on Sat morning to tell her that she’d have to cancel the reservation, so Ellyn was free to stay here, in Max’s room!

It’s been SUCH a lovely weekend.  A lovely, silly, boring, wonderful weekend!  I’m not able to do much, and this weekend my exhaustion and nausea levels were pretty high, but Ellyn was cool with just SITTING on the sofa and watching cooking shows while we giggled and ate ice cream with Baileys.

Bulb Life
Living in NYC, Ellyn doesn’t have a yard, so she happily did some weeding around our house, and also planted a bunch of bulbs, sort of as a gift for me, although she claimed that she was doing it for fun.  My intention wasn’t to use her for free yard labor, but as long as she was volunteering…  Now, THAT is a good friend!

Gerry and Andy and Ellyn have gone off to Lake Phalen to visit Kwan Yin and take the dog for a walk.  I’m sitting here on the sofa, too tired to go with them, but SO happy that my family seems to love Ellyn as much as I do!

Traveling out here from NYC was such a gift, such a kind and wonderful thing for Ellyn to do for me.  I am so grateful, and I’m also just a bit exhausted, but in the BEST possible way!  Thank you, Ellyn!

Flowers From ???
Andy received a GORGEOUS gift of begonias and cyclamen from Bachman’s greenhouse, and they are SO lovely!  The only problem is, we have NO idea who sent them!  If you sent them, and you don’t mind telling us, we would LOVE to thank you!

Andy’s been growing several different varieties of cyclamen this Summer, she seems to have inherited a love of plants from Gerry’s parents, which is absolutely stellar.

I have NO ability to grow anything, but I can appreciate a nice plant!

Spinal Taps
After a bit of a hiatus, I’ll be jumping back into the chemo pool this year.  On Monday, and then again on Thursday I’ll be getting Spinal Taps (testing to determine exactly WHAT kind and how strong the next round of Chemo should be)

My doc from Mayo, who is no longer my doc, but is still a wonderful person, has been on the phone with my doc from St. John’s up here in Maplewood, and it sounds as though there may be some kind of meeting of the minds on the direction that my chemo might take.  I’m just anxious to have a chat with Dr. N, and get a feeling for exactly how much my cancer’s metastasized since my last chemo week.  Not knowing is hard, it leads me to imagine all sorts of unpleasant scenarios.  I just want to have a good idea of WHERE my body is in this whole cancer journey right now.

I know I have pain, and I know I’m experiencing incredible exhaustion, but I don’t know where I stand right now with the actual cancer and tumors that are growing in various places in my body.